Expeditions & Education: Mackenzie Sicard and Her First Year at Tech

Industrial engineer Mackenzie Sicard led eight incoming freshmen into the Alaskan wilderness. The 11-day expedition covered a lot of ground; the adventurers and their mentors trekked through frosty wilderness with heavy packs, took in the vistas of Denali National Park, dug axes into ice to scale frozen walls and rafted down chilly rivers. Not only was this an outdoor expedition, but it was Sicard’s latest venture into leadership.

Sicard is a second-year student at the College and a member of the first cohort of the Clark Scholars Program, which creates an academic experience for students combining engineering, leadership and community service. Sicard thrives on personal connection, ambitiously pursues her goals and has a passion for helping others. Here’s how the Clark Scholars Program has transformed her Georgia Tech experience, in her own words.

Why did you choose Georgia Tech?

Since I was younger I've kind of always wanted to go to Tech. I just always loved the science and math classes, so it seemed like a logical choice. I would always see posts about these cool things Tech people did, like they would start a business, or they would turn around and pull off this amazing research feat. I viewed it as this place of great success and scholarship and achievement in a unique way that other people and other universities didn’t quite offer. I just loved that draw. I knew that the Tech degree was also a very strong one.

What was it like to get the call from the Clark Scholars Program that you were selected?

I was actually at the state FIRST Robotics competition when I got the email about it. My mom called me to tell me to look at my email and was asking me if they got it wrong. I ran up to my robotics coach and I told him about it in that moment and he said had heard about the Clark Foundation and their programs at other universities. He started telling me about it and I thought it sounded so cool.

Pretty soon after that, David Torello, the faculty mentor for the program, called me. It was just so surreal because it was this huge shock that we didn't know was coming. Then I started hearing about what the program is and what it offers.

Not only am I getting this amazing gift, but I get to be with these ten people for four years. I get to do community service and maybe start a business and that sort of thing. It was just very exciting.

What was the most compelling part of the program when you first heard about it?

For me, I really love the community service and ability to mentor other students. I'm personally one who likes feeling like I'm directly helping others. We're starting the community service project this semester and I think it's supposed to be done by next year. I'm really excited to see how that goes.

Now that we have the new cohort, I'm really excited to get to know them and help mentor them. I just love that personal connection and seeing how you're helping other people and how you're advancing their lives through your efforts.

Especially in your first year, did your involvement in the Clark Scholars Program change the way that you approach your college experience in general? Was your mindset different?

It's a little hard to say because I don't know what my mindset would have been had I come in without it. I would say it definitely did help for sure. Before coming in, we do this two-week summer camp basically, and it involves like three days of a Tech Trek with Outdoor Recreation at Georgia Tech [affectionately referred to by students as "ORGT"] and then five days of a Python programming bootcamp.

Honestly those ten days brought us all together so much. By the end of it, I felt like I had made an entire friend group that I could almost consider best friends. You leave high school without your friend group and going into college, I already had one. I think because I had that security coming in, I wasn't really as scared to try certain things either. So right off the bat, I got pretty close to some other people on my hall. I tried some cool clubs that some of the Clark people were doing and some other things I found interesting. I wasn't as scared because I knew I had that support system coming in. When I’m trying to prepare myself for the future, I still have that system of support. 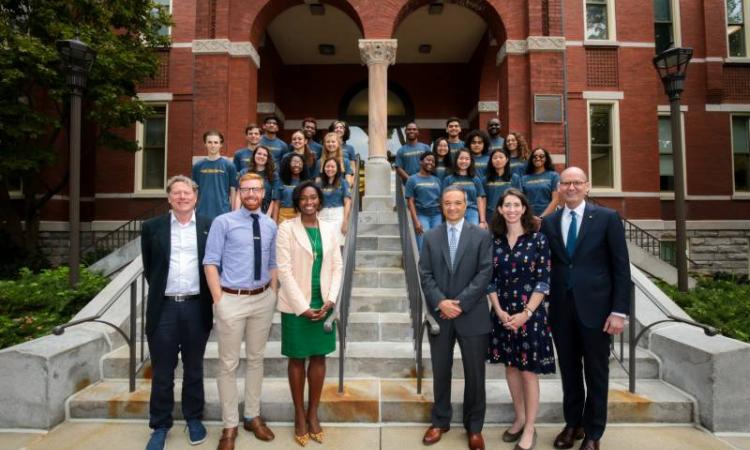 "The Clark Scholars Program is a backbone of support in any facet of my life. So if I was struggling with finding research, I know I could rely on the Clark Scholars Program to help me out and figure out how I should approach it. Or if I needed advice on how to get a job or interview, it is a network that I can rely on and lean on. I really appreciate that."

You mentioned that the Clark Scholars Program introduced you to outdoor activities at Tech. Do you mind telling me a little about that?

I was interested in ORGT coming in, but honestly it intimidated me a lot. But because we went on the Tech Trek throughout the Southeast before my freshman year, I realized it was something I really enjoyed and wanted to try. My friends in the Clark program were the ones that sort of pushed me towards the CORE program, which is a leadership development program for freshmen through ORGT. I was accepted, and I fell in love with the whole thing. I was so happy I did it because I know I would have regretted it if I didn't and found out later that I loved it this much.

Transitioning more to the leadership part, do you think CORE and Clark program kind of matched well with the whole leadership aspect?

CORE was definitely very leadership focused, so I got a lot of experience there doing presentations, planning trips, running trips, running events, that sort of thing. The Clark Scholars Program has multiple facets, so leadership was one of the things we worked on. There were some things that we had done in Clark where we would host fun events for each other, and that was nice practice that I could apply in CORE. Honestly vice versa too. There are some things I learned from ORGT that I came into some of the [Clark Scholars Program] meetings now and said “Hey, we should try this. We should try to do mentoring like this, or structure our projects like this, because it works well in ORGT.” The overlap was pretty nice.

Can you tell me about the expedition you led?

I co-led the Tech Treks Alaska with two other ORGTeers: Sam Channels, who is the president of ORGT right now, and Lauren Becknell. The whole point is to facilitate growth within the incoming freshmen. We challenge them to be leaders. Each morning, one of the freshmen would lead breakfast, and someone would lead dinner, and someone would lead us on the trails. They got that practice and got be out of the house not under mom's watch anymore. It's a really great way to just prepare them for college, because they already know that if they can handle something in the backcountry, they can do it on campus. We make sure they have a strong support system coming in with them as well. It's just a really enriching experience getting to be close to all these people and knowing that what we were doing was really helping them. From them I even learned so much myself.

It might be too soon to ask you this, but do you have any plans or aspirations for your life after you graduate from Tech?

I really want to take my industrial engineering degree and apply it towards some kind of humanitarian aid. Maybe working for a nonprofit or using that degree as like a manager for something that I feel like is bringing help to other people, not necessarily like designing products or delivering factory goods. I was really inspired by someone who I heard speak that works to optimize doctor placement in Africa based on where the doctors’ skills are most needed and where they want to live.