Skin: An Additional Tool for the Versatile Elephant Trunk

A new study from the Georgia Institute of Technology suggests that an elephant’s muscles aren’t the only way it stretches its trunk — its folded skin also plays an important role. The combination of muscle and skin gives the animal the versatility to grab fragile vegetation and rip apart tree trunks.

The research, in collaboration with Zoo Atlanta, finds that an elephant’s skin doesn’t uniformly stretch. The top of the trunk is more flexible than the bottom, and the two sections begin to diverge when an elephant reaches more than 10%. When stretching for food or objects, the dorsal section of the trunk slides further forward.

The findings could improve robotics, which today are typically built for either great strength or flexibility. Unlike an elephant’s trunk, the machines can’t do both.

As an example, the study’s authors point to soft robotics. Their fluid-filled cavities allow flexible movements but can easily break when forces are applied. The researchers say the elephant findings suggest that wrapping soft robotics with a skin-like structure could give the machines protection and strength while continuing to allow flexibility.

The paper is published in the Proceedings of National Academy of Sciences (PNAS) by the same Georgia Tech team that authored a study last summer about how elephants use their trunk muscles to inhale food and water.

“When people extend their tongue — a muscle-filled, boneless tissue similar in composition to an elephant’s trunk — it stretches uniformly. We expected the same when we challenged an elephant to reach for food,” said Andrew Schulz, the study’s lead author and a Ph.D. student in Georgia Tech’s George W. Woodruff School of Mechanical Engineering. He and the team filmed two African savanna elephants reaching for bran cubes and apples at Zoo Atlanta.

“But when we looked at our high-speed camera footage and plotted the trunk’s movements, we were surprised. The top and bottom weren’t the same at all,” Schulz said.

After seeing the video, Schulz stretched the tissue of a dissected elephant to better understand the skin’s elasticity. That’s when he found that the top of the skin, which is folded, is 15% more flexible than the wrinkled bottom side. It’s also when the team realized they weren’t just seeing muscle movement on the video. They were also tracking a thick sheet of skin.

“Flexible skin folds are the elephant’s innovation,” said David Hu, Schulz’s advisor and a professor in the Woodruff School and the School of Biological Sciences. “They protect the dorsal section and make it easier for the elephant to reach downward, the most common gripping style when picking up items.”

The Georgia Tech study also found that an elephant trunk differs in another way from other boneless, muscle-filled appendages found in nature, such as squid and octopus tentacles. Instead of extending evenly, an elephant telescopically stretches its trunk like an umbrella, gradually lengthening in waves.

An elephant first extends the section that includes the tip of its trunk, then the adjacent section and so on, gradually working its way back toward its body. Schulz says the progressive movement towards the base is intentional.

“Elephants are like people: they’re lazy,” he said. “The section at the end of the trunk is 1 liter of muscle. The section closest to its mouth is 11-15 liters of muscle. An elephant will first stretch the end of its trunk, then the adjacent section, because they’re easier to move. If an elephant doesn’t have to work very hard to reach something, it won’t.”

Schulz said he had to rely on a drawing from 1908 when learning about trunk anatomy because scientists and engineers haven’t done much research on the biomechanics of elephants during the last century. Part of his curiosity of elephants is based on helping them; he thinks a better understanding of the animals will lead to better conservation efforts. As a mechanical engineer, Schulz also sees the applications of robotics.

“Soft robotics created with biologically inspired design are always based on muscle movement. If they were wrapped with a protective skin, like an elephant’s muscle-filled trunk, the machines could apply larger forces,” he said. “Last year we learned that a trunk is a multi-purpose, muscular hydrostat. Now we know that skin is another tool at its disposal.”

Instead of extending evenly, an elephant telescopically stretches its trunk like an umbrella, gradually lengthening in waves. It first extends the section that includes the tip of its trunk, then the adjacent section and so on.

Blank Space (small)
(text and background only visible when logged in)

The work was supported by the Army Research Office, an element of the U.S. Army Combat Capability Development Command’s Army Research Laboratory, under contract number 295 W911NF-12-R-0011. Any opinions, findings, and conclusions or recommendations expressed in this material are those of the authors and do not necessarily reflect the view of the sponsoring agency. 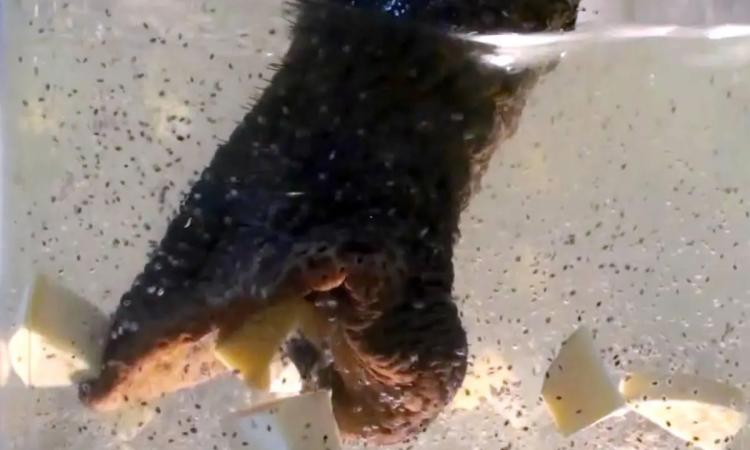 How an Elephant’s Trunk Manipulates Air to Eat and Drink 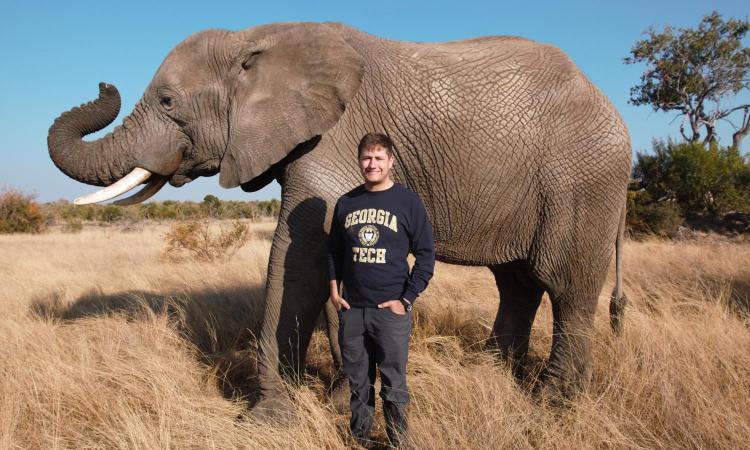